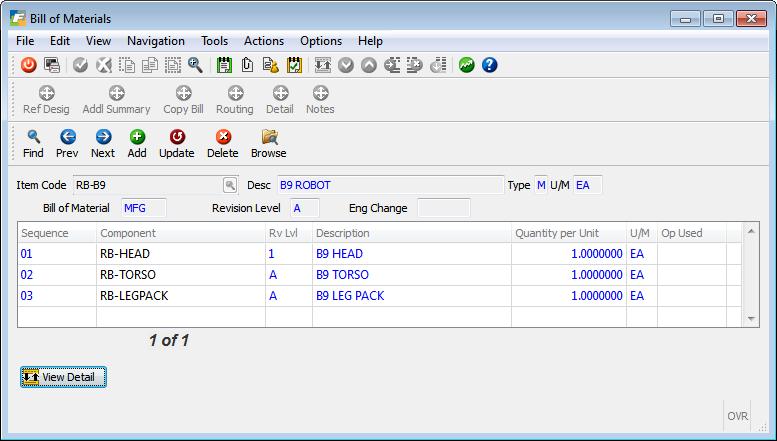 Manufacturing processes have evolved significantly over the last 40 to 50 years.  Gone are the days when it was common practice to produce items in bulk, only to be stored in inventory until they were needed.

The primary objectives of a production facility during that time were:

The industry has changed quite a bit since then.  Today’s environment of rapidly changing and variable products recognizes that excess inventory means reduced liquid capital and obsolete materials.  Why have money tied up in products that aren’t being used?

The industry has shifted towards dramatic reductions in work in process levels, avoiding the wasteful expenditure of resources and increasing manufacturing efficiency.  A key feature in these improvements is the Multi-Level Bill of Material.

What is a Multi-Level Bill of Material?

Let’s begin with an example.  You work for a company that manufactures Desktop PC’s.  These PC’s are made up of various component parts: a system unit, a monitor, a keyboard and a mouse.  This simplistic list of parts constitutes what is termed a Single-Level Bill of Material.

As a PC manufacturer, you could use one Single-Level Bill of Material when assembling the component parts of a PC, which would contain ALL of the lowest level parts; however, without an in-depth knowledge of how to put the parts together to make a PC, you will be left with a pile of computer parts.  By contrast, a Multi-Level Bill of Material gives you more specific information as to which parts go where.

Advantages of a Multi-Level Bill of Material

A Multi-Level Bill of Material has significant advantages in both engineering and production.  For the engineer, a Multi-Level Bill of Material provides them with a snapshot of the complex structure of the product they are designing.  For the production employee, it makes it easier to visualize how components come together to produce an item being sold.

Many companies define Multi-Level Bills of Material in an ‘As-Engineered’ format, where the physical breakdown of a produced item is defined, without regard to where the materials come from, or how they are produced. They may also define an ‘As-Built’  format, used in manufacturing planning and production, to define items being purchased and intermediate items being built as subassemblies.   A major advantage of our Fitrix ERP software is that it supports Multi-Level Bills of Material in both formats, for the same manufactured item.

Another advantage to the Multi-Level Bill of Material is the more intuitive tracking of engineering revisions. Let’s go back to our PC manufacturing example.  The fan in the power supply your company has been using in its PC’s makes too much noise.  After customers begin to complain, your company decides it must be upgraded to a quieter version.

The system unit which contains both the power supply and motherboard does NOT need a new part number as its basic function and purpose is not changed. However, it SHOULD be assigned a new engineering revision level, to differentiate it from the earlier version.  For our purposes, we will call it revision-b.

Because the system unit was revised to level ‘b’, the top-level Desktop PC should also be changed to its next revision level, to properly track the effects of changes at lower levels in the overall bill of material.

The revision process is made simpler with the use of the Multi-Level Bill of Material.  By using a Multi-Level Bill of Material, a revision is easier to track on its way up the hierarchy to the top level, the PC.  This provides valuable information to the production manager, who is responsible for ensuring that the item is built according to its revision level. It is also critical from a warranty service standpoint, so that if the product is serviced after the sale, production history will reflect the revision level of the individual unit.

Another important feature of the Multi-Level Bill of Material is the use of “phantom” parts.  A phantom is a part that is typically not built and placed in inventory, but is given a part number and a bill of material to define the components that are assembled together in the overall process.

In our PC example, the completed motherboard assembly might be a phantom.  The manufacturer plans to assemble the motherboard in-house, and the phantom’s bill of material easily shows the production employee what parts are needed and how they are to be put together.

Let’s say a company decides it is more efficient to use a vendor to assemble and supply the motherboards.  The vendor can use the phantom’s bill of material to assemble what would for them be a final product and then ship to the company. The company could then ‘turn off’ the phantom designator so that the component item would now be considered purchased.

Another feature inherent to Multi-Level Bills of Material is the visibility of the details behind multiple usages of common components.  Manufacturers can often use a component part at more than one place in the multi-level bill of material for the end product.  For example, our PC might utilize common memory chips in several different places.  A Multi-Level Bill of Material shows the manufacturer exactly where the memory is being used in the PC.  If a company is considering a change to the memory chip (such as a different model or supplier) a Multi-Level Bill of Material makes it easier to evaluate the potential impact (changes in function, cost, efficiency) if the change is made.

Modern manufacturing is changing, and ERP software with a robust Multi-level BOM feature can help manufacturers stay ahead of the curve. For companies interested in lowering work in process levels, optimizing cash-flow, reducing product costs, and increasing efficiency, Multi-level BOM is a must.